Last night I went down to Ground Zero. Click on pics to enlarge. 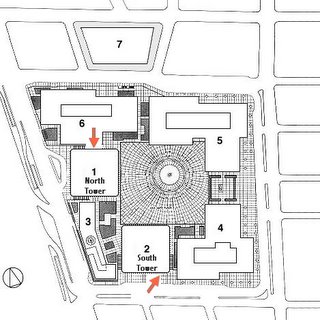 Here's a better map of what's now Ground 0. The area of detail is now a big hole in the ground. All of the numbered buildings are gone. Building 7 also collapsed and has been replaced. 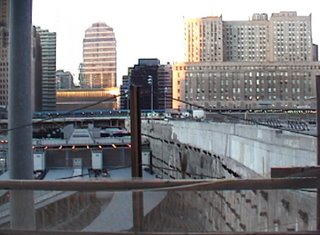 From the southeast corner, looking north along the east wall of the hole. The building just left of center is actually a refection of a building in the new, mirror-y #7. 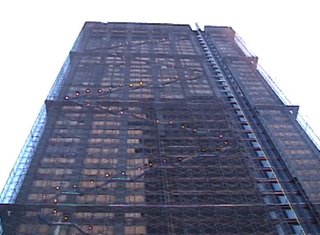 The Deutsche Bank building, just south of the hole. (Not even half as tall as the twin towers were.) It's scheduled to come down in May. The next photo is a close-up of the makeshift staircase, with the little lights, that goes up the north face. 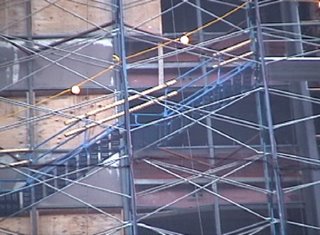 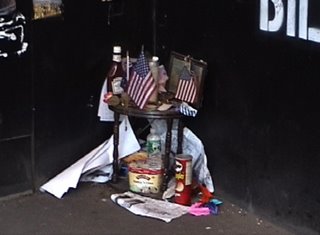 It's really sad to think of someone not being able to think of things like ketchup and Pringles without having to think of losing their family member in the attacks. 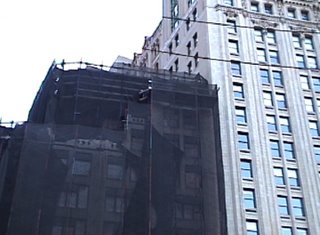 Another building not that's not in very good shape, just west of the Deutsche Bank building. 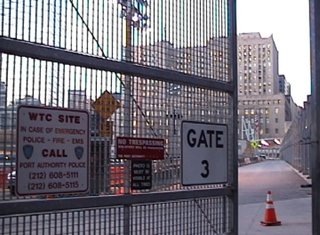 Looking north along the east edge of the hole. 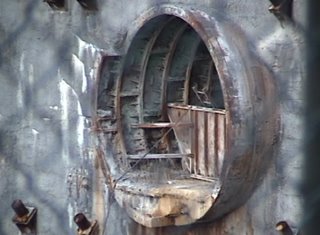 A huge drain along the east wall. The ladder inside gives perspective. 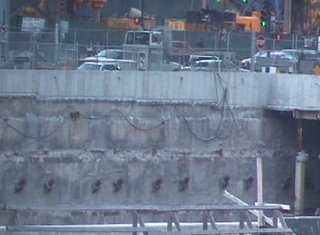 The northwest corner of the hole, taken from the east side of it. 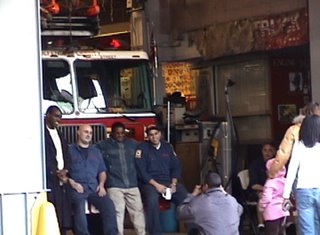 This fire station is right on the south side of the hole, facing it. 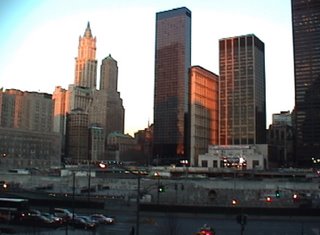 Looking east out over the hole, from 1 World Financial Center. This complex, just west of Ground Zero, is still fully functional. It must be so weird for the people who have worked there since pre-2001. 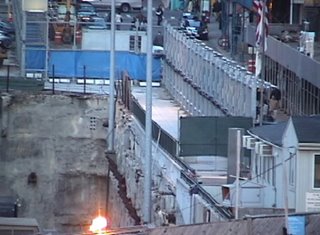 Looking east along the south wall. You can see people peering in throught the fence on the right, under the American flag. 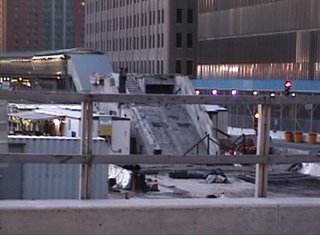 This is taken from the east of where building #5 was, looking west.
This staircase is the last thing within the site still standing. Apparently, some of the last people to escape the area alive on September 11th used this staircase. The next two shots close in on it. 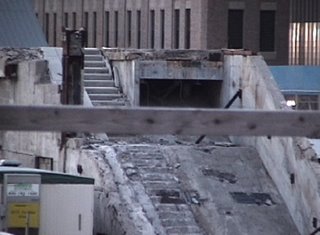 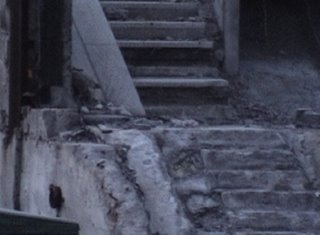 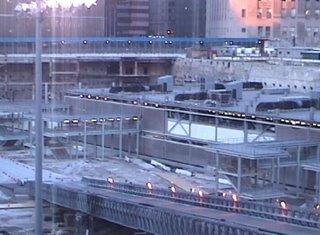 View from the southwest corner. 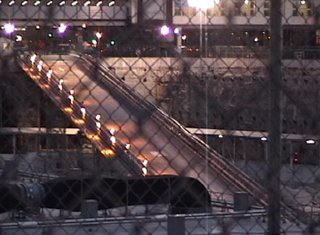 And from the northeast, you can see the ramp from the last pic from the opposite direction. 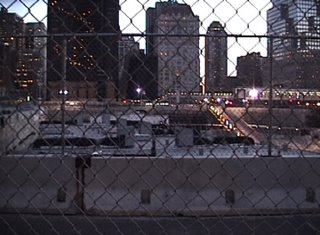 From the northeast, looking south. You can see the doomed Deutsch Bank building (the black one) that I mentioned earlier, with its makeshift zigzagging staircase. 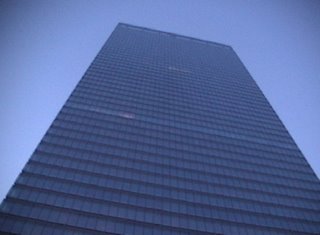 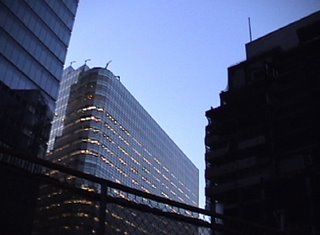 On the far left, the edge of the new 7. On the right is Fiterman Hall, to show you how close the two are. 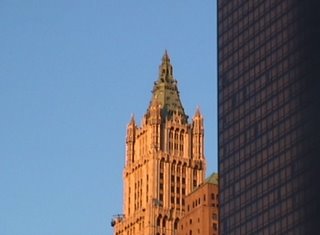 The Woolworth Building, once the tallest in the world, as seen from Ground Zero. 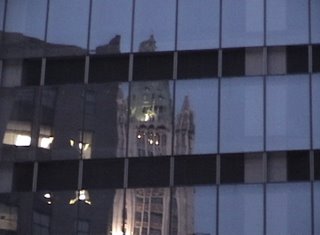 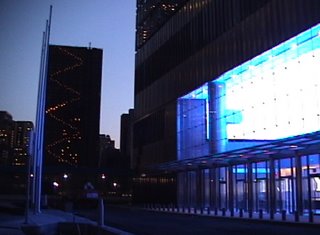 From the unfinished plaza of the new #7, looking south out over the hole. You can see, yet again, the Deutsch Bank building on the other side of Ground Zero. 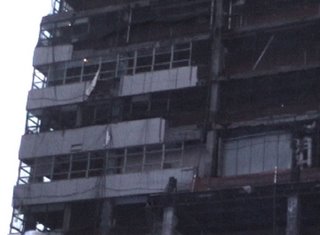 Being down there for a while, I got a sense like the commuters streaming around me, while used to people with cameras I'm sure, would rather I not be there. I was just one more person in their way. For them, it's no big deal, I guess, since they walk by there every day. It has been almost five years after all. But it's something I'm interested in, so I just went down there. I'm not so sure the air quality down there is back to normal. I coughed up, uh, something, afterwards. It wasn't as bad as when I went down there in early November of 2001. I was in the city and decided to go check it out. This was before the first "viewing station" was set up. I remember walking down West Broadway, headed toward the smoke still rising from the site, going past cars that obviously hadn't moved since before September 11th, covered in gray dust. Then I followed the crowd that was slowly moving toward Ground Zero, even though it was late at night. A worker was warning everyone: "The air is not safe here. Cover your face. If you have children, don't bring them in here." And I remember walking up to a fence, peering through a hole and seeing a building that looked like the one in the Oklahoma City bombing, its face torn off. And then walking away. It was like a funeral procession. The smell there was the worst I'd ever experienced. It hurt my nose. As I walked away I noticed my sneakers had turned gray. 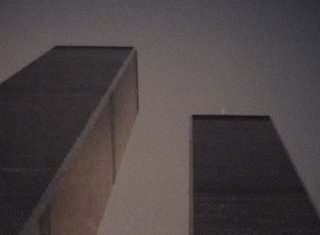 I was there with friends walking around not 4-5 days before. Haven't been there, save for walking by incidentally, since.

Thanks. Wow, I double-captioned that last one. I think I'll leave it like that.

I was at yankee Stadium three days, before 9/11, on my birthday, for Sox-yanks. We lost. But for the first time that day, I realized that you can see the Manhattan skyline from INSIDE the Stadium. Behind the plate, upper deck, stand on your seat and peer out the slits. So, that was the last time I saw the towers in person.

Staggering shots, Jere.
Dad and I went to Ground Zero many months after 9/11, and we were standing on the viewing platform next to the old church where George WAshington worshipped, the church saved by the massive trees in its front lawn. Many of the trees were down but the ones that were up were trailing these long spiraly things. They sort of looked like the microscopic shot of DNA. I asked a fireman what they were and he said, "Mini-blinds. Office mini-blinds." They were made of metal and had been blown everywhere. They were left hanging in the trees for a long, long time.
Mom

It was a favorite spot for shopping & filing for NY State Civil Service Exams.

BTW, I was at that Game on 9/8. I looked down towards The Towers. An eerie feeling came over me & I couldn't explain it.

Two FDNY Associates died in the collapses. In one case, the FDNY Captain, had returned from an injury to duty.

He commandeered a truck from Metro Tech to his fate.