When we left off, a new bus had just arrived. Here's Tito comin' in. Doesn't it look like he's holding a gun, like he's about to assassinate Buckwheat or something? 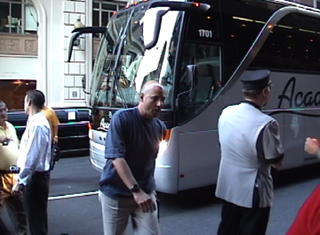 Here, Tito says hi to someone he knew: 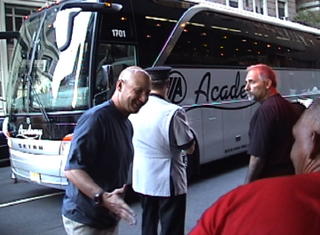 And he's happy about it: 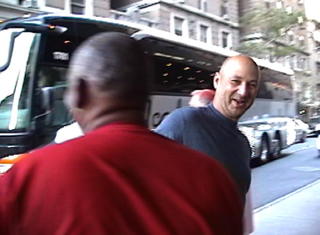 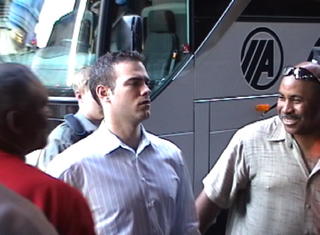 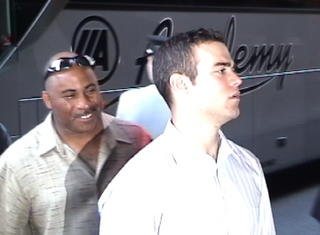 Olerud and Bradford. Olerud looks at his fans as if to say, "Hi, I'm John. I'm as nice as I am tall:" 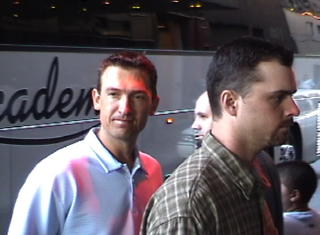 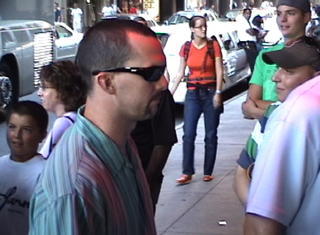 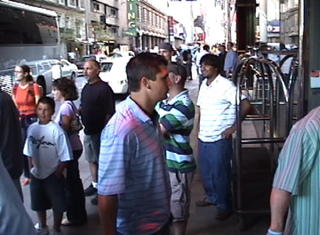 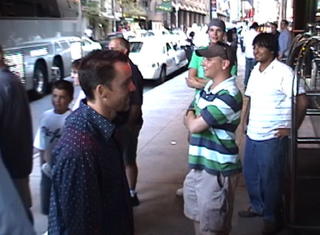 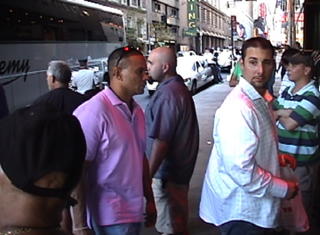 Okay, who's this guy? A shaman of some kind? Should I know who he is? He'll come into play later: 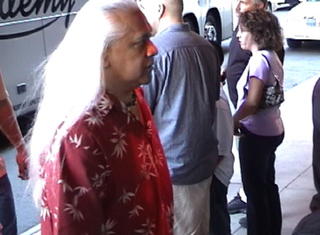 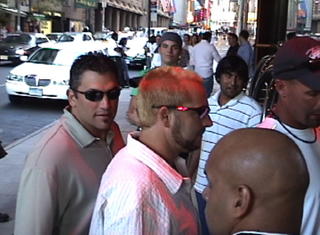 Millar walks through the lobby as some dude looks on in awe: 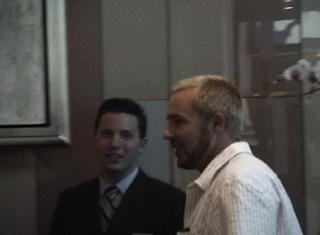 At this point, everybody who's staying at the hotel is inside, except for Johnny, who already took off, and Manny, who most likely stays with family when in NYC. Varitek's in, as he took some sneaky way in from the bus, but can be seen on my video on the escalator with Mirabelli in the lobby. We stand right outside, so we have the full view of the outside and the inside. So we always know when a player is coming or going well in advance. Edgar's also inside, but I didn't get a good shot of him. He's also a notoriously shy person.

So, we stand around outside, waiting for players to come out. This is when Reb goes for autographs and pics of her WITH players, while I keep filming and taking pics when she needs me.

Last time we did this, we met a dude named Milan. Milan really showed us the stalking ropes. Reb learned a lot from him and wasn't afraid to go right up to players, tap them on the shoulder, and ask for a pic. The players respond to this a lot more than they do to a forty-year old dude in sweatpants and a Megadeth shirt holding a folder full of resellable baseball cards looking for autographs. Reb is a pretty blonde, which helps, but I think it's more in the method of the request that gets the job done. Plus, a pic is easier than an autograph for these guys.
She did go for Clement's autograph, which she got, on a Hello, Kitty notebook: 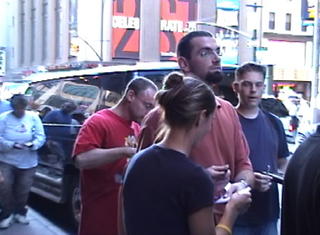 Everyone else, she went for the pic of her and the player. Actually, Steffi Graffanino turned her down, but he was in the minority: 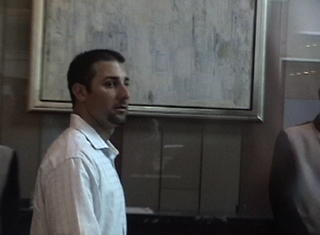 Jason never really stops for anything, though. 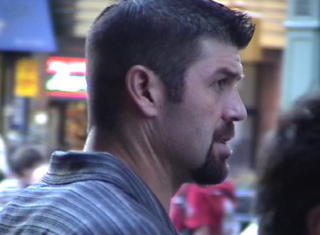 He and Karen left on foot, holding hands: 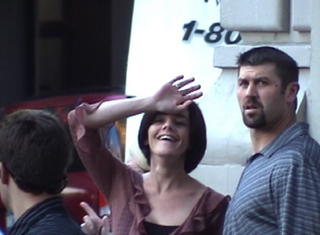 I spotted Joe Castiglione, and was way more interested in him than Reb, of course. I hadn't even seen him come in: 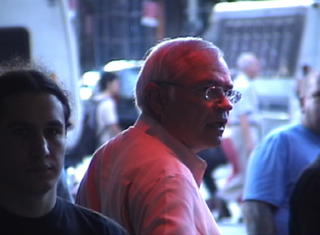 Here's Reb with Kevin Millar. Although he's behind glass and facing the other way: 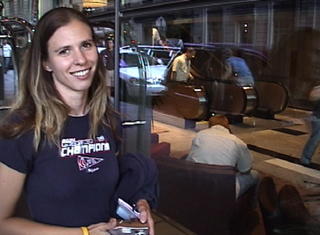 But then Millar came out, and here's Reb working the Milan magic. That's her blonde hair, and Kevin's in white. You can see the hounds on the left. They've already realized that Kevin's not signing, and he gets right past them. But Reb goes right after him: 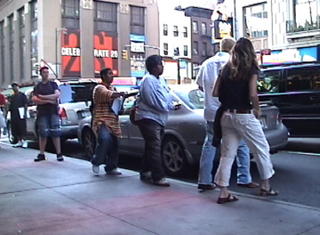 She taps him on the shoulder, he agrees to the photo op, and I run up behind, get her camera and take their picture together. All while still rolling with the video camera. Here's what the camera sees as I hold it at my hip, while taking the shot with the digital in my other hand: (don't ask me why Kevin's looking at the wrong camera at this point.) 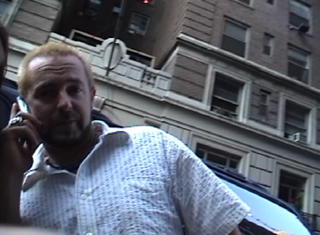 For the actual pic I took, as well as Reb with many other Sox, go to Reb Sox.

Here's Olerud, Cora, or as I call him, Cor-ge Posada, and PeoplefortheEthicalTreatmentofAnimalsGINE, all heading out on foot for their respective nights on the town:

End Part 2. Next post will feature much more as more dudes came out, and Reb got their pics and stuff. Stay tuned.

[Edit: Per Reb's comment, I forgot this story, from when we were doing the picture-taking with Millar. An older dude had pulled up to the hotel with his wife in a Jaguar. He was standing around, waiting for it to be valet-parked. He smoked a cigar and wore a yankee hat. His wife, a Tino jersey from happier times. He spotted a guy with bleached-blond hair (Millar) and ran over to him. He yelled, "Curt! Curt!" We were all confused. "Curt! I just want to let you know how pissed off you made me by pitching so well today." I said "That's not Curt Schilling, it's Kevin Millar!" And Kevin also told him that he wasn't Curt. I love when yankee fans make it that easy. He skunked his way back to his Jag, where I got a nice close-up of him with a completely embarrassed look on his face. So, Reb, is that what you were talking about? You said my camera missed that? It's kind of an audio story. I missed nothing.]

Comments:
um, my hair's not all that blonde. At least, I haven't had anyone call it straight-out blonde since third grade. just sayin'.

oh, and why don't you tell the story of what your camera MISSED with the Millar shot?

That is true, it's more of an audio story, although it would be so great to have on film, with the confused faces and then him fully humiliated... but then again, if it weren't for the picture you were taking at the time, I bet it never would have happened at all.

I'm pretty sure that the long haired guy is Russell Nua, the team's massage therapist.

Although I was hoping it would've been more exciting than that.

I hope Ol' Russ is doing the same kind of massaging now that he did over the last 8 games of last season.

Aw, Russell Nua's pretty exciting on his own. From the Globe profile on him last fall, it sounds like he's lived a very interesting life and has a pretty cool philosophy of living.

And I agree on the massaging.

Was that Petagine's wife? Is he married to a castmember of "To Wong Foo"? Yikes.

Petagine's wife is about 20 years older than he is. I think that was her in the photo, but I'm not sure. His wife is actually the mother of one of his Venezuelan winter ball teammates. The Japanese press was extremely nasty about the age gap for the whole 6 years he played in Japan. I'm not sure where I picked up that trivia, but I'm gonna guess that the Boston press got nasty about the age gap at some point, too.