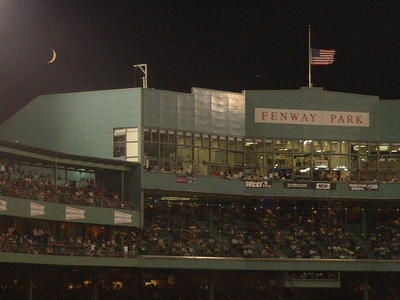 Another beautiful night at Fenway, in more ways than one. This is one of my favorite shots ever. It was right when Fred Lynn was waving from his seat. I knew I wouldn't really be able to make Fred out, but I'm glad the star and the moon came out so well.

Before I left for the game, my mom said she'd chip in on some hurricane relief if they were doing that "take your picture with players" thing again. So when WCSG and I went inside, we happened to pass autograph alley, and saw Wakefield and Myers up there. Now, those guys are great, and I'd want to be photographed with them regardless, especially for a good cause, but I've always wanted to tell Wakefield about the common friend that he shares with my dad. All right, through that friend's dad. But it's something. So I grabbed my mom's fifty and my fifty and ran to the line. As soon as I filled out the official form, we were brought right up to Wake and Mike. There were folks in front of us on line, but for some reason it seemed like they'd all just been waiting for us to arrive, as we were whisked right up to the front. We immediately were positioned right behind our favorite oddball delivery/style pitchers. Mike Myers is a really friendly guy. He saw what I was wearing and said, "Bad News Bears, cool." Wakefield looked back and chimed in with a Beavis-like "Heh heh, cool." Mike then asked me if I "saw that movie." I told him I hadn't seen the remake. All this happened in a few seconds, as some other person was telling us all to smile. They took two shots, and started motioning for us to get the hell out of there. Just then, someone else started talking to Wakefield, but I culdn't miss my chance. "Timmy," I said as I very slowly started walking away. He looked back, and I told him of my four-to-five degree connection to him. He acknowledged it, and I thanked him and Mike as I was being pulled away.

So, I guess the deal is that they sign it and send it to you later. You know they'll remember me from the Bad News Bears jersey. Maybe just for that they'll each throw some season tickets my way along with their autographs. You know, just something in the grandstand. 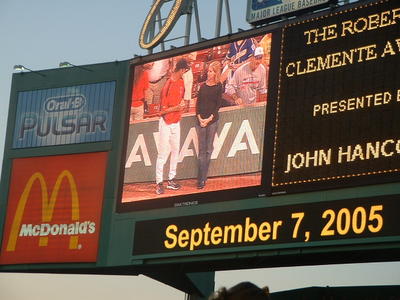 Here's Timmy getting the Clemente Award. 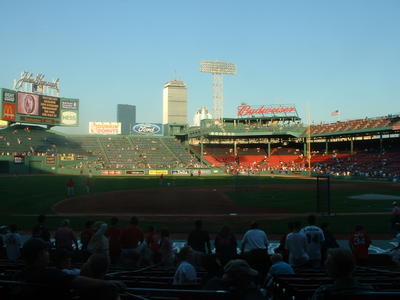 Here's the view from seats we totally didn't have. 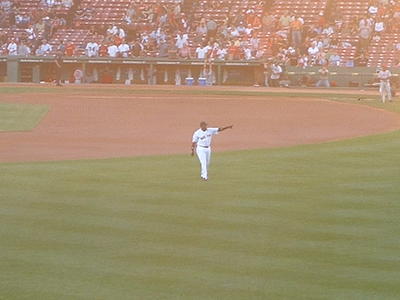 That's more like it. Bleachers, section 43. Here's David acknowledging me using a serious of off-camera mirrors. Section 43 had a rogue element I didn't like last game (of our 10-game plan.) And this time there were just a bunch of empty seats where the regulars sit. Even "the big man" didn't show. Was nice to have some room around us, though. 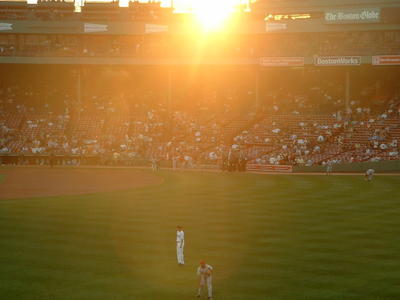 I've done the "Bronson ascending to heaven" shot before. But this time, the sun was right above him for an even more heavenly feel. 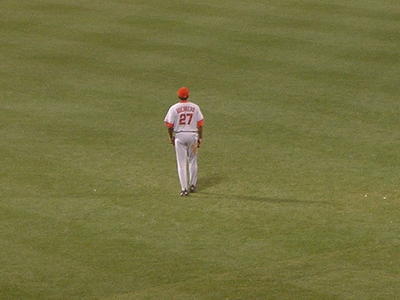 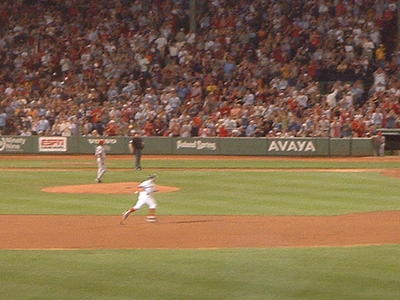 Millar rounds the bases on a dong. 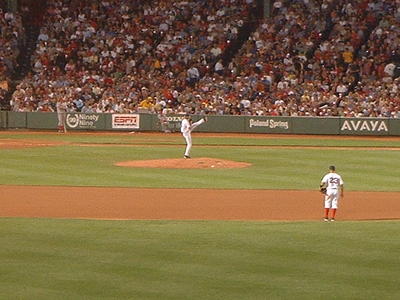 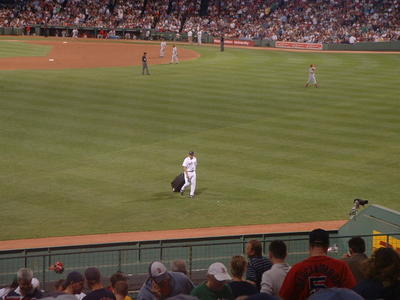 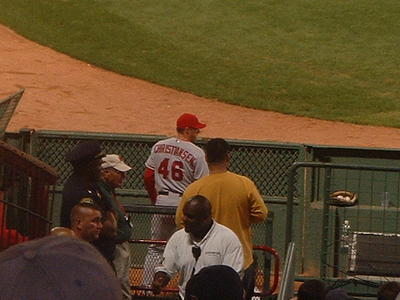 The dude that fought with Bonds. 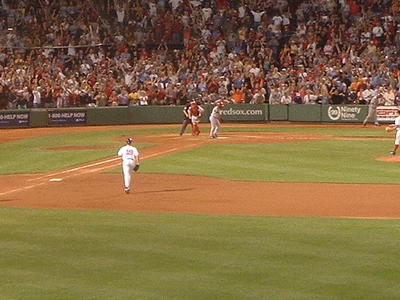 Comments:
peter*...Wang gave up 11 hits in his last stint at Columbus. My feeling tonight is that Tampa Bay will take advantage of his relative rustiness and score some runs. As we know, the Yankees are capable of scoring a ton of runs, so who's to know the eventual victor. But I do say that Wang will be gone by 3 2/3 after giving up 4 or more. Maybe not enough to win, but...........

Like the concept as well - I used to live in the 'boken until I came back to see the sox win.