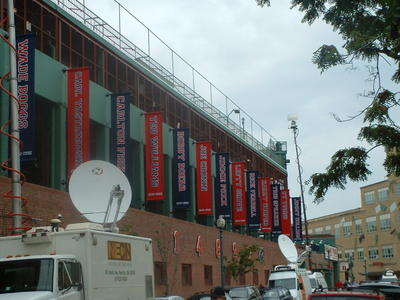 It was overcast, but not raining, when I got to Fenway Park on Monday. I didn't expect to be there for two games the following day at this point. Above is a new feature at Fenway. I'm guessing those are the names of the members of the Red Sox Hall of Fame. Click to enlarge any of these. (These are digital photos, not video stills.)

You won't believe me when I say that I didn't intend to get any shots of players arriving at the park. It's true. But, after getting one of six non-metered spots in Boston at around 2:30, there wasn't much else to do. Bill Mueller appears to be playing tag with this about-to-be-"it" guy: 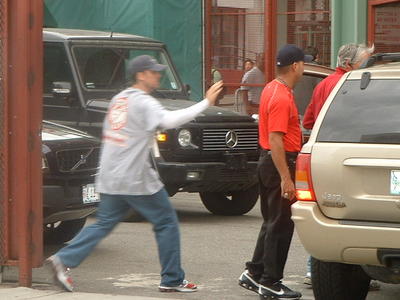 Johnny arrives by Hummer, as is the MLB tradition. If I were rich, I'd get a crappy car, and then just replace the whole damn thing if anything broke. I don't know why these people need this stuff. Seriously, what would be better for people who lost their houses in a hurricane, these guys wearing the Red Cross symbol on their helmets, or donating their Hummers, each of which could house a family itself? I'm just sayin': 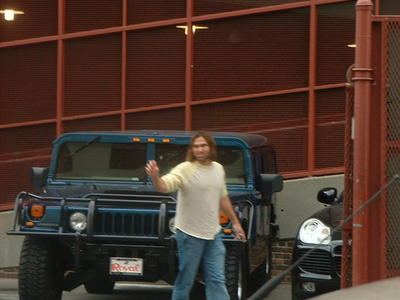 Bronson gets his proverbial shit out of the trunk: 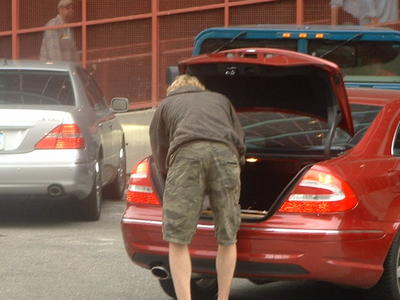 Reb and I have this theory from when we see the Sox at their New York hotel. We think they run screens so that the shy Edgar Renteria can go in and out unbothered. I think I proved the theory here. Jason Varitek, who seems to be known as the non-autographing-type, suddenly was outside, a few garage doors over from where all the fans were waiting for the player cars to come in. Everyone rushed over there. After five minutes of signing and picture-taking (good job, Jason, even if my diversion theory is correct), he went inside. When I got back to where the cars come in, someone said, "Edgar just went in!" Diversionary tactics, I tell you. Here's Jason: 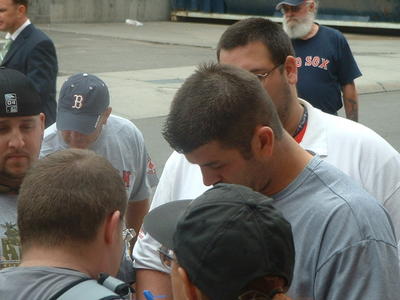 David Ortiz, as his shirt clearly indicates, is a PIMP: 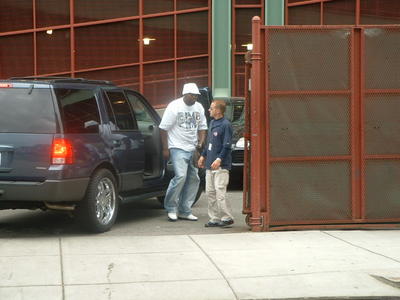 Tonight's star, Lenny DiNardo. DiNardo's not just a pitcher in Boston, mind you: 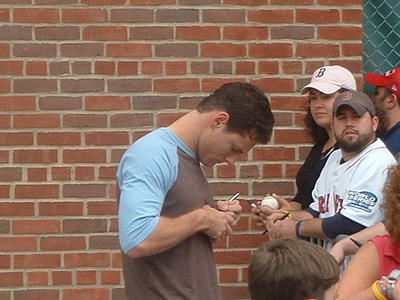 There's a new low in player stalking. As we, uh, I mean, all the losers and me were standing around, I noticed some people looking up. I looked up to see the Sox training facility. Before a huge, mechanical shade rose to cover all the windows, I got this shot of Johnny. (Window on the far left, middle row. Look close for the face of Jesus): 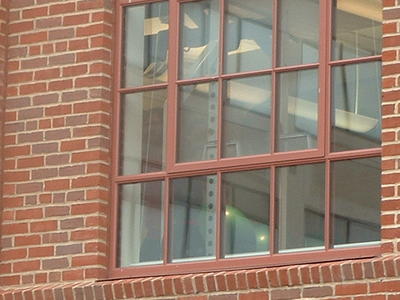 Witch City met up with me, and we went in. The tarp was on the field. No BP. They played both anthems, but the tarp just never came off. We went over to 12-Eight to see Andrew. He was as cool as his blog, even when it's being negative. That's a nice view from 12-Eight. WC and I decided to go down to better seats, since it was drizzling, and a lot of good seats were open. There was no reason for us to go back out to 43-Thirty-One. Here's the view we had: 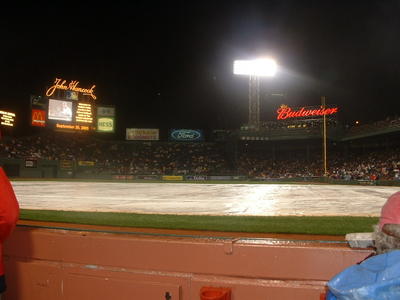 And then they called the game. So, the next day, I figured I'd buy tickets to the night game, so WC could go, since she couldn't make it to the make-up day game. I got there bright and early, and found a dude who was selling. He wanted $160 for two bleacher seats for the night game. I offered him 100 and one ticket to the day game. He bit. Of course, I'm probably the one who was suckered, and, in fact, the other guy berating my seller to make him seem like the "dumb" scalper was probably all part of the routine. But, whatever. I was getting two games, and I knew I'd get a good seat to game one, since there would be plenty of no-shows.

Tuesday was a much nicer day. Check out the blue sky: 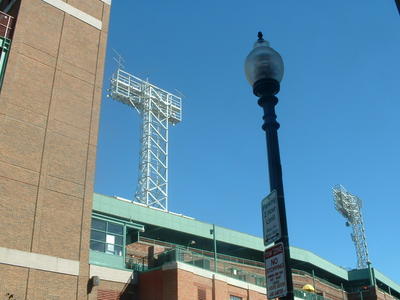 Hanley was alone in the dugout when I first arrived: 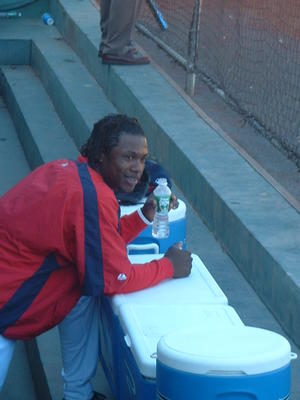 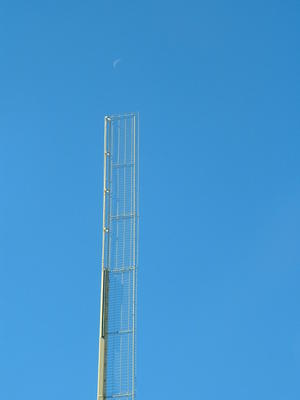 Here was my view for the first pitch: 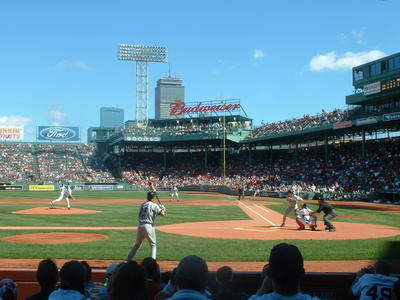 That Blue Jay dude thought he had a homer around Pesky's Pole. Everyone else knew it was foul. Except the manager, shown here, arguing the call: (I like the guy in the white shirt in the crowd calling it foul.) 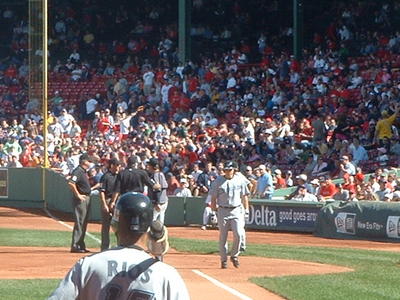 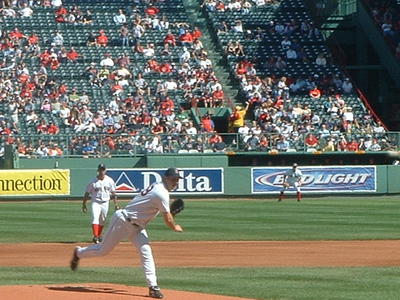 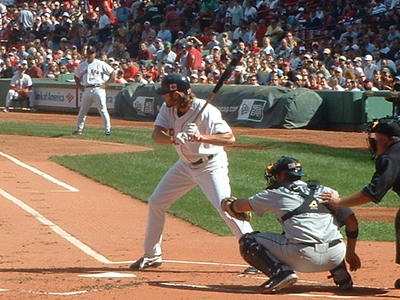 Edgar, with Johnny leading off first: 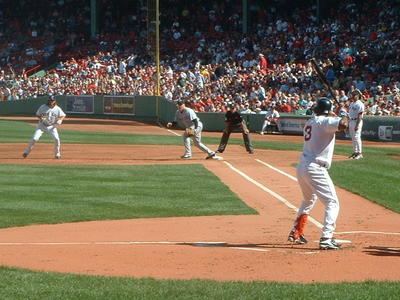 Papi, with Manny on deck: 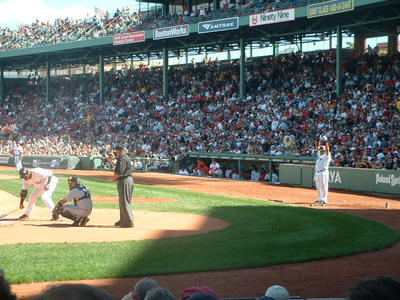 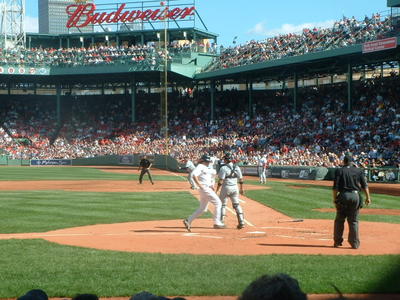 I had a great view of Drinkwater and Kapstein. I like how Kapstein sticks out like a sore thumb: 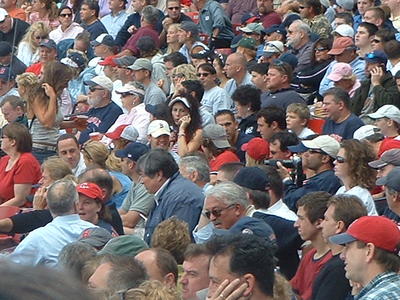 Around the bottom of the fifth, the dude who had my seat finally showed. So I headed over to 12-Eight, where Andrew was sitting with his dad, whose yankee-hating I'd admired from afar in Andrew's comments section. From there I got some good shots of a hawk that was flying around Fenway. Here it is perched on the Volvo sign: 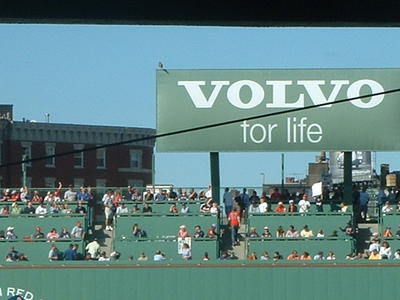 Here, the Sox have just won, thanks to great performances by Wake, Papelbon, and Timlin: 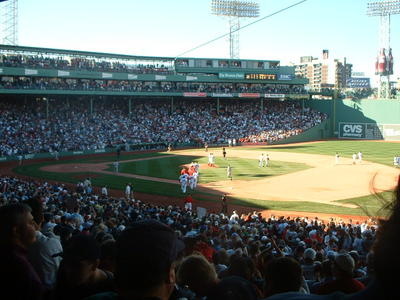 And here's that hawk-ish bird again, after the game: 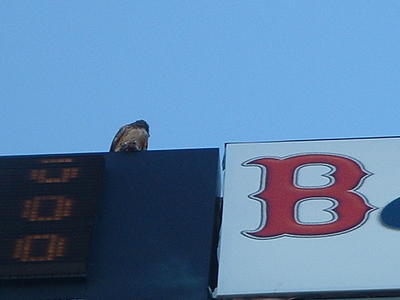 Between games, the only action was when Doug Flutie backed his Trans Am out of the parking lot: (I swear it's him. Why do I keep getting shots of the back of Flutie's head?) 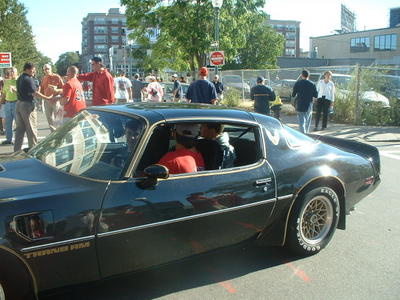 WC arrived, and this time we sat in our real seats, the ones I bought on the street. Row 6 behind the Jays' bullpen. We sat next to a man named Bob. He was cool. Very interested in the yanks' score. It was great seeing that O's number keep going up and up. The whole crowd would go nuts whenever Balty would tack one on. Also, Drinkwater was honored on the field before the game. We heard a man behind us explain to his Chicagoan friend that "you see this guy behind home plate on TV." Man, Chicagoans don't know crap about Drinkwater and Kapstein. 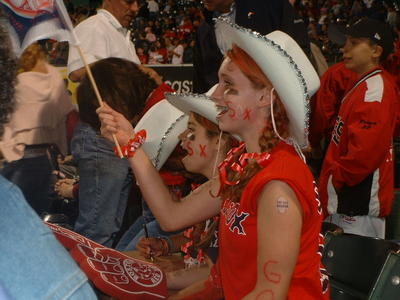 The bullpen dudes came out before the game, but Schill wasn't done warming up. So they all stood there and waited until he finished. Here they are, standing and waiting, as we all tried to communicate with them and take their picture: 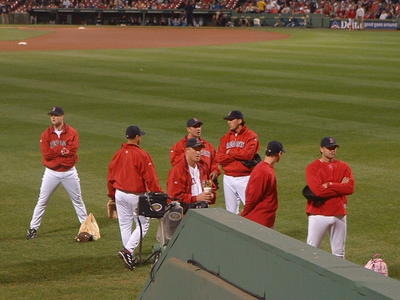 And at that point, I'd filled up the whole camera. But shots from the bleachers don't really come out all that well, anyway. It was an exciting game, despite us missing a golden effing opportunity, and a fun couple of days.

Comments:
I'll be in one of the skyboxes Sat., Jere, so if you're there snap off a couple shots and when you post them, I'll let you know if I'm in any of them. I ALMOST had 2 passes, but nogo.

I'll be in one of the skyboxes Sat., Jere, so if you're there snap off a couple shots and when you post them, I'll let you know if I'm in any of them. I ALMOST had 2 passes, but nogo.

Sadly, my Saturday ticket has been rescinded in favor of some girl, so I'll either be scalping one or I'll be at home getting mad at Tim McCarver.

Okay. so I'll look for Peter, who I've never seen before, but not Andrew, who I have seen before. I'm sure this will work out fine.