When I saw Ghostbusters in Washington Square Park last summer (one of my crowning achievements in life), there were maybe fifty people there, scattered across the lawn. I guess I figured this was what all outdoor, summer night movies were like in New York.

I didn't realize the scope of the Bryant Park Summer Film Festival.

The movie was Jaws. This was the first movie I ever went to when it was originally released in 1975. I was negative one month old at the time, still in the womb. So I didn't actually see it until a few years later, but it's become one of my favorites.

It was to start between 8 and 9, so I met Chan, who was coming from work, at 6:30 at Grand Central. We walked over to Bryant Park, a few blocks away, thinking we could check out the scene, go and get some food, and then come back for the movie. I even thought that if Chan just wanted to meet me there, I could go early and get a spot up front, and flag him down when he arrived. Oh how wrong all these plans turned out to be.

We arrived at the park to find the entire city-block-sized lawn filled to capacity with literally thousands of people. Every square inch of grass was covered by blankets, each one right up against its neighbor. And all the tables around the lawn were completely filled.

I began to think this wasn't about Jaws, but rather the idea of a free movie in the middle of a very popular area. Although the host-type guy did say we were a record crowd.

Some guy even came up to me and asked, "Who's playing here tonight?" It did seem a little like Woodstock, only with tall buildings all around.

Chan and I eventually grabbed some space behind a railing on a ramp, far from the screen. It was actually a pretty good view, but we did have to stand the whole time. But we're young, we can handle it.

Here's the scene when we got there: 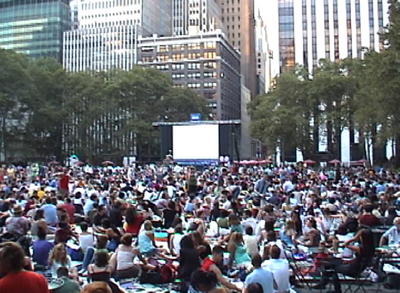 Looking to the left, we could see the top of the Empire State Building. The library is at the far left: 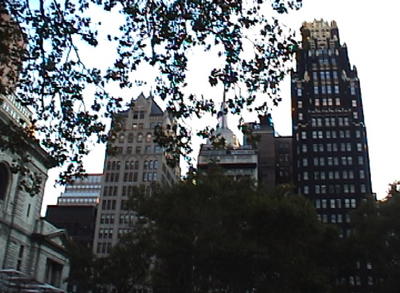 A Sox fan in front of a Roseanne-looking woman: 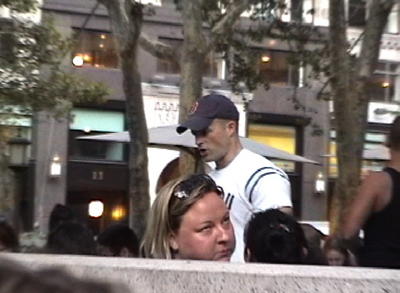 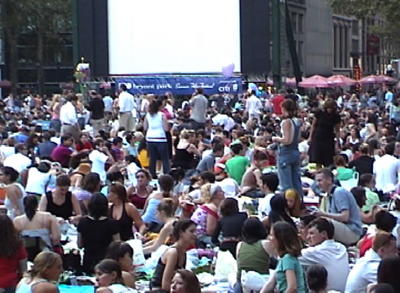 People were nuts about the whole Jaws thing. One guy had a "JawsFest" T-shirt, and check out this shark balloon: (I heard one dude even blogged about his experience at the movie and posted pics. Loser.) 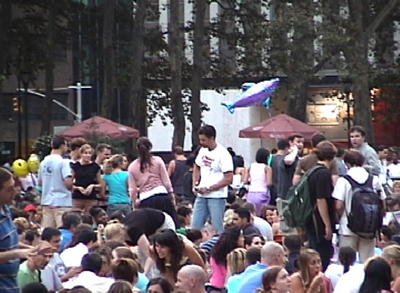 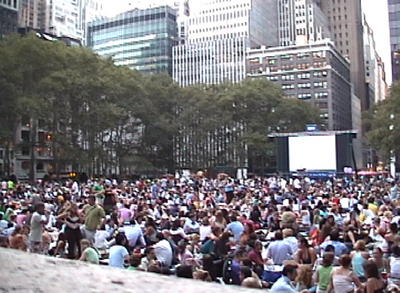 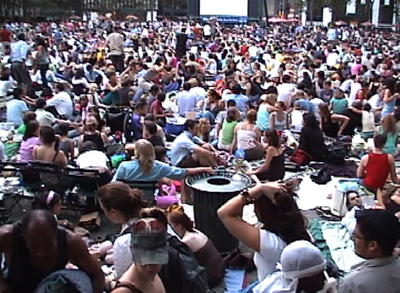 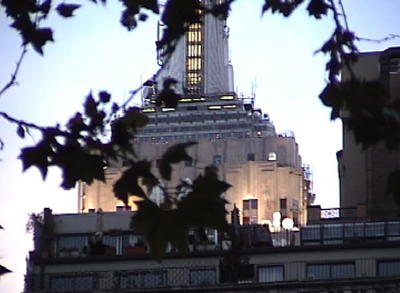 Sun starting to set over midtown: 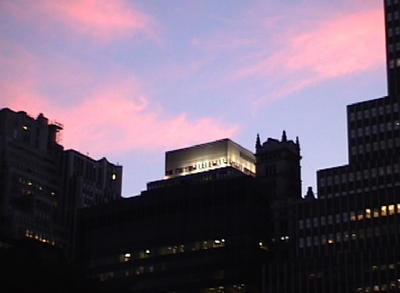 A balloon floating away in front of the ESB: 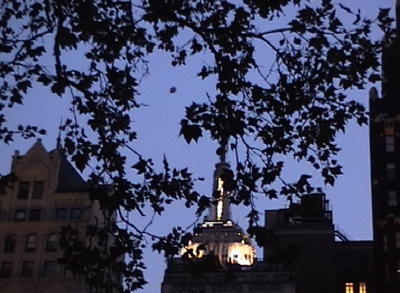 Click on these to see bigger, slightly blurrier versions, by the way. In this shot, you can see people along the observation deck-i-matsui. Why is there barbed-wire up there? If you're climbing over that, you're about to feel a lot more pain than some minor abrasions. Maybe it's to deter BASE jumpers: 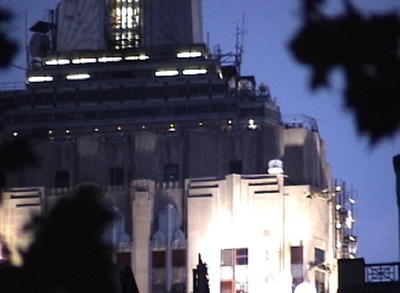 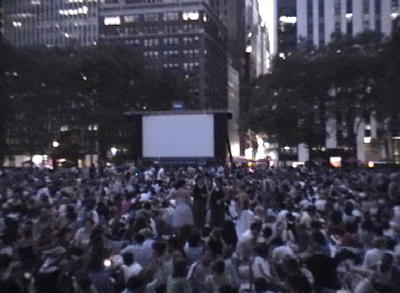 Chan surveys the scene from our perch: 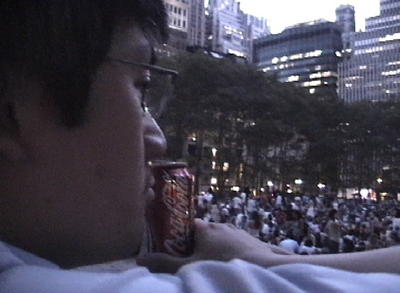 Leaves with red light. The light is at the top of the spire of the ESB, which is blurred so that it's pretty much invisible. I thought it was cool: 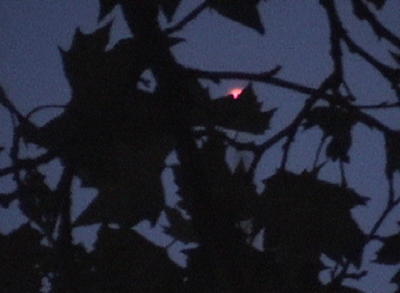 We got some previews, as well as a Tweety cartoon. In this shot, check out that splotch below the left-most point of Tweety's umbrella. That's a bat. Enlarging helps: 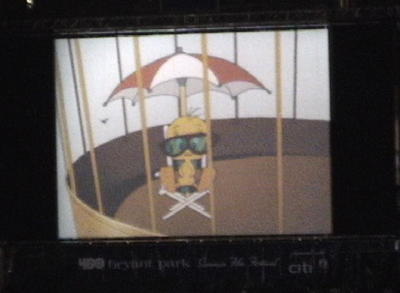 One of the biggest cheers was for the Looney Toons logo. Also when someone would get eaten. And when Robert Shaw first appeared. Also, for the line "You're gonna need a bigger boat." The movie had that classic HBO intro from back in the day, the one they use a crappier version of now on HBO. When this came on, a man (below) stood up, raised his arms, and started jumping up and down. Soon, the entire lawn was jumping, arms held high. Other New York people, help me out here, is this some strange tradition? I mean, I love that old HBO theme, but I never actually stood up and started jumping around like a maniac upon seeing it: 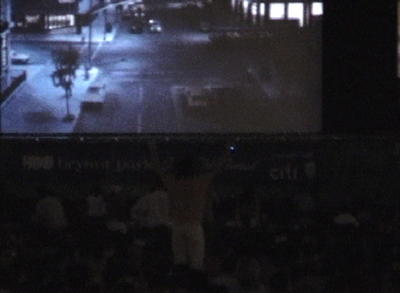 Again, the movie was Jaws: 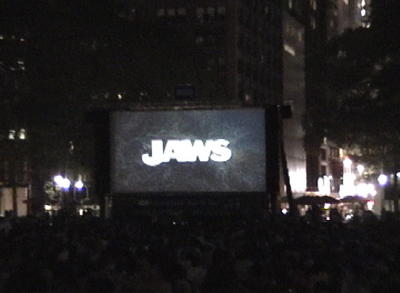 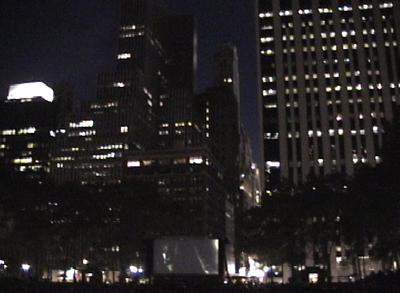 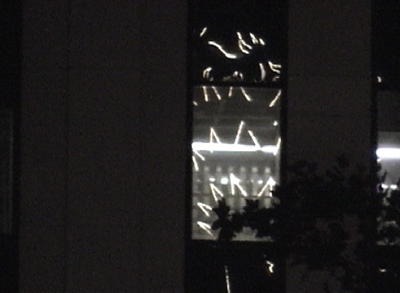 I had to include Robert Shaw. I tried to make it look like a Shaw billboard among the buildings: 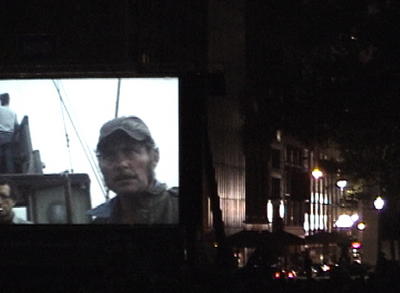 That's it. We then went shopping at Food Emporium. I got donuts. Chan got soup. Good day.

Comments:
Yeah, getting up and waving/jumping around like that during the oldschool HBO theme song is a Bryant Park tradition. So's not getting a good seat if you don't show up when they open the park around 5pm or getting a seat at all if you don't show up by around 6:30pm, especially for the last film of the season. And afterwards, don't leave ice on the grass; the park is now officially closed.

By the way, how could you not go with a reference to TMBG's Sensurround?:

Man, how I would love to see this movie on a real screen. In a real city. (Nothing against Salem, but our showing was at the old town hall. And it wasn't free. And I missed it anyway.)

Great job with the pics, by the way.

Y'all know me. Know how I earn a livin'. I'll catch this bird for you, but it ain't gonna be easy. Bad fish. Not like going down to the pond and chasing bluegills and tommycocks. This shark, swallow you whole. No shakin', no tenderizin', down you go. And we gotta do it quick, that'll bring back your tourists, put all your businesses on a payin' basis. But it's not gonna be pleasant. I value my neck a lot more than three thousand bucks, chief. I'll find him for three, but I'll catch him, and kill him, for ten. But you've gotta make up your minds. If you want to stay alive, then ante up. If you want to play it cheap, be on welfare the whole winter. I don't want no volunteers, I don't want no mates, there's too many captains on this island. Ten thousand dollars for me by myself. For that you get the head, the tail, the whole damn thing.

I'm old enough to have seen Jaws in the theatre with my family as a kid. Quint is my all-time favorite movie character. We vacationed in Martha's Vineyard in July, and hung out on the beach and the bridge where they filmed it. I also bought a "Amity Hardware/Jaws Week" t-shirt with the shark logo in Edgartown, the same day that I saw Tim Wakefield out getting ice cream with his family (all-star break).