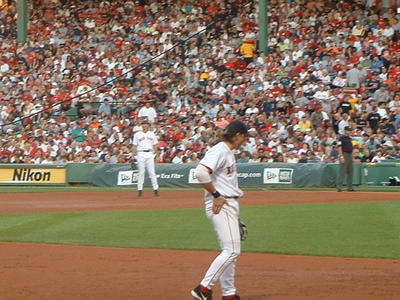 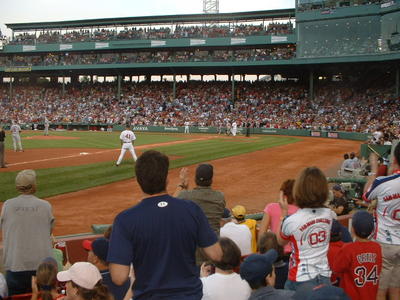 The good thing about Manny being out was that Kapler got to make his '05 debut. It was great to see his first at bat. We cheered our heads off for our World Champ. This was just after he tipped his helmet to us. 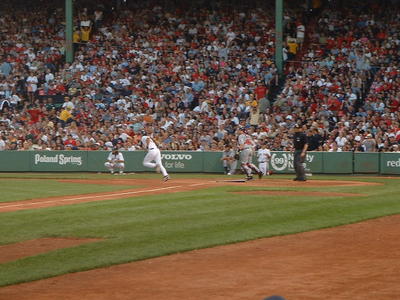 Kapler gets a hit. 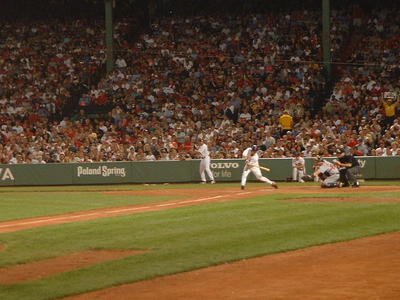 Bill Mueller was called out on this play, after the third base ump called this a swing. Here's evidence that it was not a swing. And, of course, I can give you a 100% guarantee that this was the exact moment he stopped his swing. Remember that Brady Bunch episode where Greg took a picture of that cheerleader, and ended up with photographic evidence of a wide receiver's feet in bounds in the background? This is kind of like that. Except I didn't develop the pictures in a makeshift darkroom in my house. 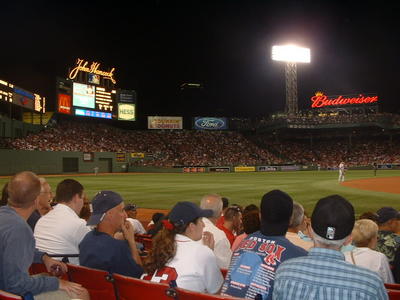 General "Fenway at night" shot. Did anyone else have those Fenway postcards back in the early 80s? The day one and the night one? Those were great. I used to just sit and stare at those, since I hardly ever got to see Fenway on tv. 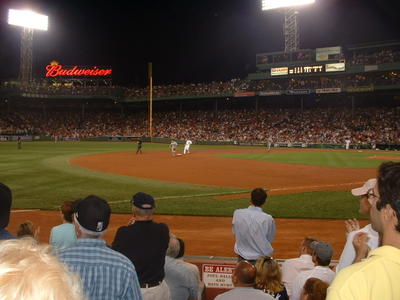 Johhny pulls into second with a double. 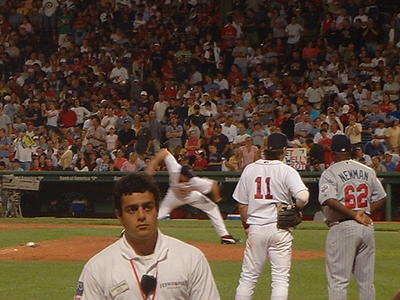 Here's a good shot of Bradford's delivery, but with people in the way. 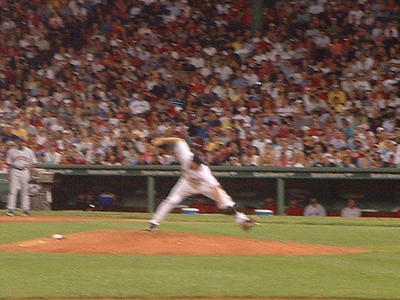 Here's a blurry shot of Bradford's delivery, with no one in the way. 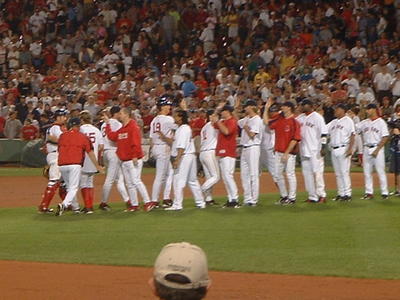 We were happy to see Manny come out of the dugout at the end of the game, excitedly hugging his teammates. This was the moment I knew that my "everything's gonna be okay" suspicions were accurate. And what probably went undereported was the fact that, at this moment, the entire crowd started chanting Manny's name. The next day, I was again confused, as they gave Manny yet another day off. But then I heard how he said he wanted to stay, and win another title in Boston. Talk about your happy happy joy joy moment. Then, of course, he came off the bench to win the game for us. Talk about your mega-happy happy etc etc moment. Also, I predicted a sweep of the Twins. But I was sure to not say that out loud beforehand.

And the Angels just GAVE away games to the shitty yanks. And for the first time in a while, I just didn't let it get to me. I know which team is going to win in the end.

Comments:
The Saturday Angel giveaway really bothered me. It just seems some teams are overcome with the pinstripes and forget how to play ball. But Sunday's similar act didn't bother me in the least. I was in Manny land with a late inning five-in-a-row dream state.