Our seats were upper bleacher, just in front of the center field scoreboard. We could see replays if we craned our necks, but as Pat pointed out, from the extreme angle, the pixelation made the players look like Atari baseball players.

Here's a shot that really captures our four personas perfectly. The back of my newly mostly-shaven head, and the weird hole that's forming at the top of my hat. The sun shining down on Kim's head. Pat keeping score of the game. Rebecca taking our picture. It's all there: 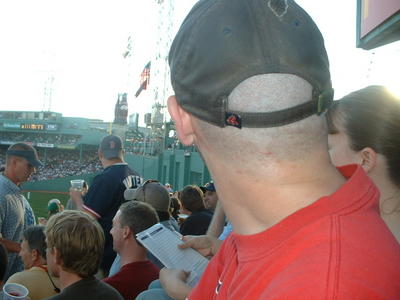 Theo and Schill were standing there talking for a long time. In this position: 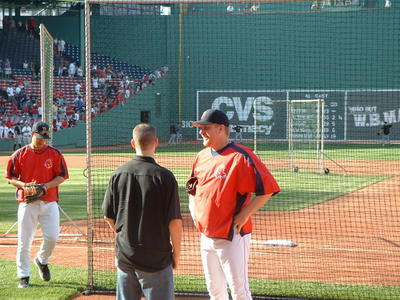 Here, Kim and Reb (and me) wait not-so-patiently for Theo to turn around. The one time he did, Rebecca got a call on her cell phone, which turned out to be a wrong number. And she makes fun of me for not having one... 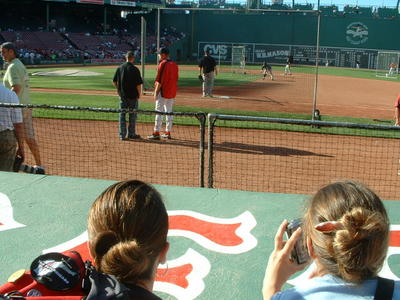 I finally got this shot of them as they walked into the dugout. 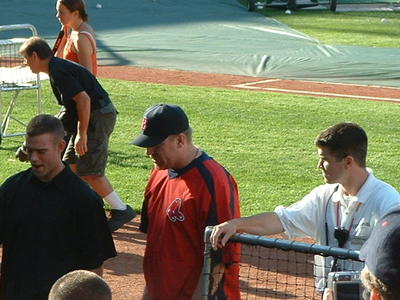 Here's Tek and Billy. This also shows you what a beautiful evening it was. And you can see Damon's kid on the far left: 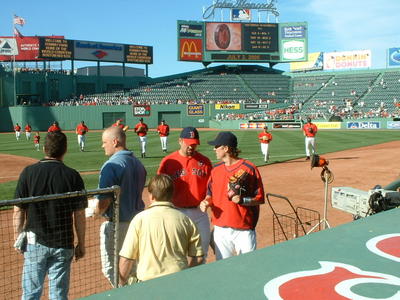 The usual Johnny autograph-signing shot. Some total ass next to me threw a Skoal tin on top of the dugout for Johnny to sign. Johnny said, "I ain't signin' that." Good job, Johnny. 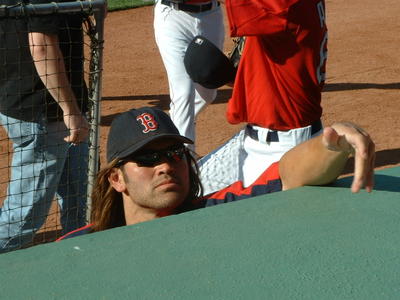 C-Tek just always has to be in that catching position: 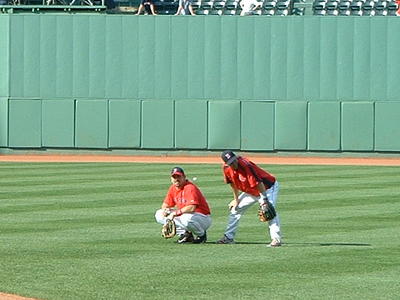 Abe was called up before the game. Abe! I've seen this guy just about every time he's been at Fenway: His start last year, a game where they handed out minor league awards, the ring ceremony, and last night. 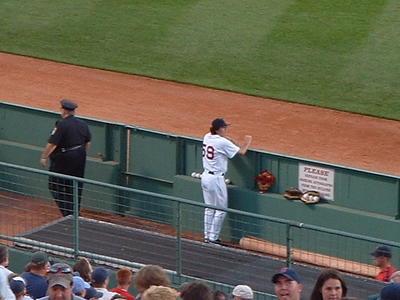 Here's the moment after Wells threw the ball toward the ump, after being ejected. (Out in the bleachers, we had no idea why he was tossed.) You can see the ball boy retrieving the ball in the outfield: 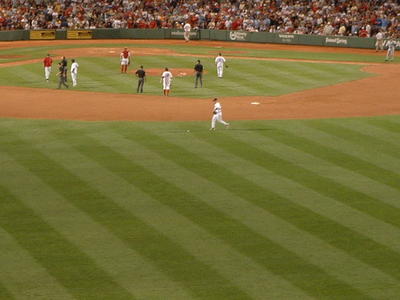 Here's Manny in his home run trot, with David scoring ahead of him. Lots of hugging and celebrating during and after this key home run. Ortiz was even hugging the fans. I love these guys. What a team. 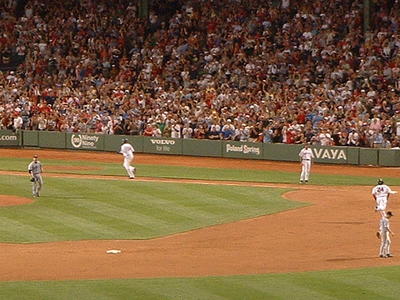 Comments:
Great pictures and account of the game. Your hat has now surpassed Trot Nixon's in terms of grodiness.

Did you happen to notice what the city-themed song was? The world needs to know.

Ah ha!!! I believe they outed your mystery home plate man today on the NESN Broadcast.

Jeremy Kapstein (or Capstein)Senior Advisor to the Red Sox. Rem Dawg wished him a Happy B-Day or something.

I can't believe I didn't think of this before, but the theme song for Kids in the Hall would have been perfect for the Jays. They played a lot of AC/DC, and though we tried to establish a link there (Thunderstruck and Toronto both begining with T, the lyric "shaking like a leaf, "referring to the Maple Leaves, something about Toronto possibly having more thunder per square foot than the states - we were really stretching).

Jere, since no one else has said it yet, I, meaning you, will: Nice sissy strap.

Empy: We did hear what had to be a new-ish Metallica song as the Jays were coming up, after Thunderstruck. I looked at a list of new Metallica songs, and one did have the word "leaf" in the title. Could be.